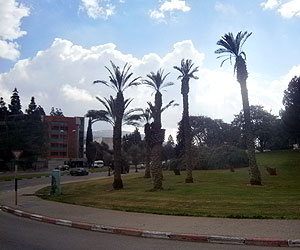 Karmiel is located in the north of Israel, in the Western Galilee, in the valley of Beit-a-Kerem. It is located 250 meters above sea level.

The city is inhabited by both native Israelis and immigrants from different countries. In the 90 years, during the Aliyah, the city's population increased sharply.

In Karmiel there are several enterprises of high technology industry and a plant of the company "Strauss". Many residents of the city work in nearby industrial areas of Tefen and Bar-Lev.


City streets and attractions near the city:

City streets and attractions near the city:

Israeli Settlements in Judea and Samaria

Religious Cities and Villages of Israel

Distances between Cities and Villages

The Health Care System in Israel

Hospitals and Medical Centers in Israel

Cities and Villages of Israel

Traveling in the Holy Land

The Antiquities of the Land of Israel